All of Me by Lisa Renee Jones Blog Tour

ALL OF ME, the sixth and final novel in the INSIDE OUT series is
NOW AVAILABLE 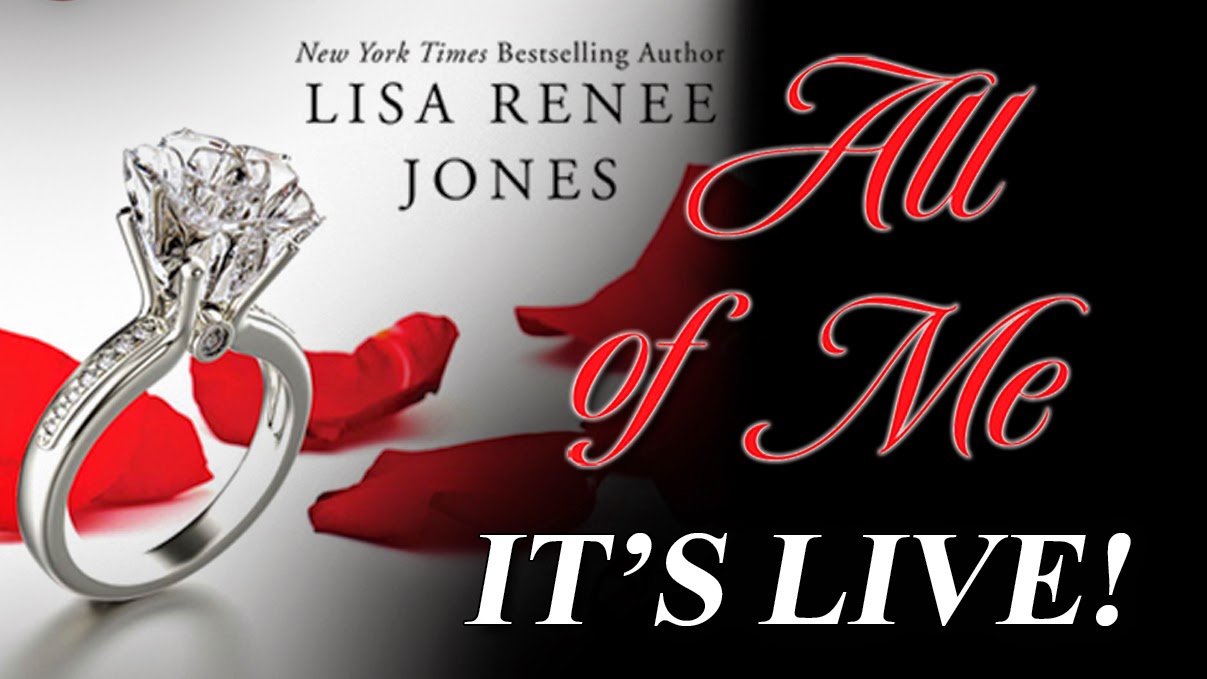 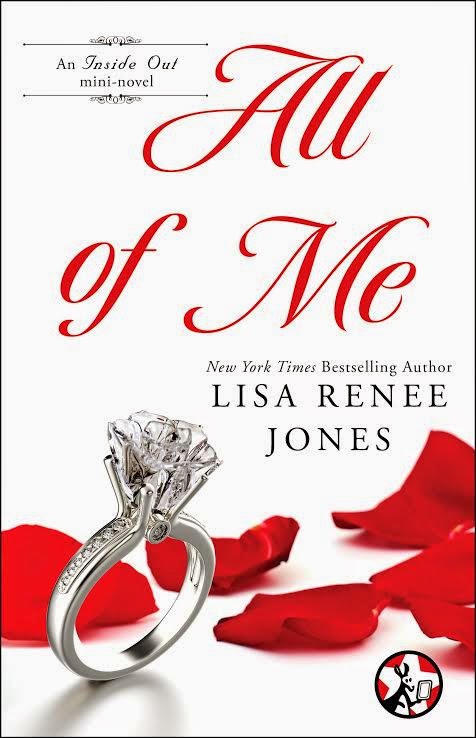 BLURB
Passion. Mystery. It all collides in the breathtaking conclusion to the New York Times bestselling INSIDE OUT series, ALL OF ME.
He's rich and famous, his past dark, but so is hers. Can they save each other? Or will the darkness tear them apart? 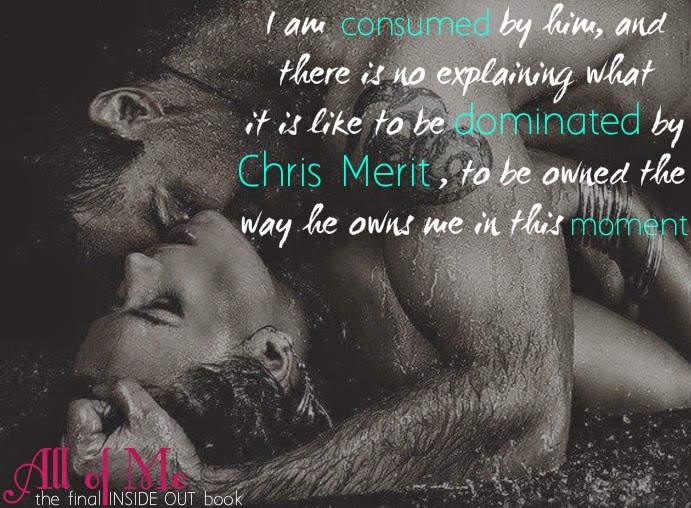 Excerpt from All of Me (Inside Out #6) by Lisa Renee Jones. Copyright 2014

We say a quick goodbye, and to my shock, the instant I push the “end” button, Chris pulls

the 911 to the shoulder of the road, puts it in park and turns to me. “Talk to me. What just

“You stopped to ask me what happened?”

“Yes. I stopped to ask what happened. Now, tell me.”

My lashes lower a moment as I savor just how good this man is to me. I curl my fingers

on my cheek. “Thank you for stopping, but really, there was nothing worthy of concern. Let’s go

“After you tell me what happened,” he orders, but the tenderness lacing the stubborn

determination of his tone wins me over, as does his sincerity. He really cares and I am truly not

with, it hit a nerve. I started worrying about Ella, and thinking about my father, who I don’t want

to come to our wedding. I truly don’t,  yet somehow, the very fact that I don’t gives him the

power to twist me in knots.”

Chris nods. “As did my father to me, no matter how much of a bastard he became.

Sometimes I think the worse he treated me, the more I wanted to win back his affection.”

I’d seen glimpses of these feelings before now, but this is the first time he’s spoken them

aloud. “Maybe it’s some inborn need to feel close to a parent?”

“That’s the only conclusion I could come to when I couldn’t let him go. I still can’t. He’s

always with me, making sure I stay just a little more fucked up.”

“If you’re fucked up, it’s all kinds of right, Chris Merit. That charity work Tristan talked

about? You don’t just throw money at it. You give pieces of your soul to those kids and their

families. You make a difference and I’ll be honored to help you do it.”

He pulls my hand to his mouth and kisses my fingers. “Let’s elope. Anyplace you want to

go. Say the word and as far as I’m concerned we’ll go tomorrow.”

“What? No. We decided on Katie and  Mike’s place together. And my ring isn’t even

“This isn’t about a ring. Or Katie and Mike, or anyone else. It’s about us and I don’t want

you worried about your father or the guest list. You know I’m not big on attention anyway.”

I lace my fingers with his. “You’re trying to protect me and I appreciate that, but I want to

get married under those hanging rose your mother inspired Katie to plant.”

“Don’t do this for me, baby. I just want to spend the rest of my life with you. That’s all I

“It’s for us. You know my father is just a hot button for me. I’ll get by it. And truth be

told, I’m a little raw over Amber, too. That night here in Paris when I went to the club I had this

sense I needed to save her. I shouldn’t have listened to that feeling.”

“Don’t do that to yourself. You barely knew her.”

“Yet, on some level I felt her screaming for help. But I second-guessed myself and

thought it was Rebecca and Ella influencing my feelings.”

“You were a lot of the reason I pushed to get Amber help, Sara. It was just too little too

“Yes,” he says, stroking the hair out of my eyes, his hand staying at the back of my head.

“Now here’s what’s going to happen. We’re going to leave this all right here and I’m going to

drive us the fifteen minutes we have left to get to the chateau, where we’re going to fuck like

rabbits. Then, we’re going to eat and fuck some more. After we sleep, we’ll set some rules with

Katie about the wedding so you won’t worry about it and then we’ll fuck some more. And since I

had the caretaker that lives in the house behind the chateau stock enough food to last us a week,

we can stay in bed for days on end. Any objections so far?”

I smile and not just at his words, but at his rapid shift from dark Chris, to playful, sexy

He, leans closer to me, his breath on my ear. “I’ll just tie you to the bed.”

Yes. Please. My list of objections begins to form. 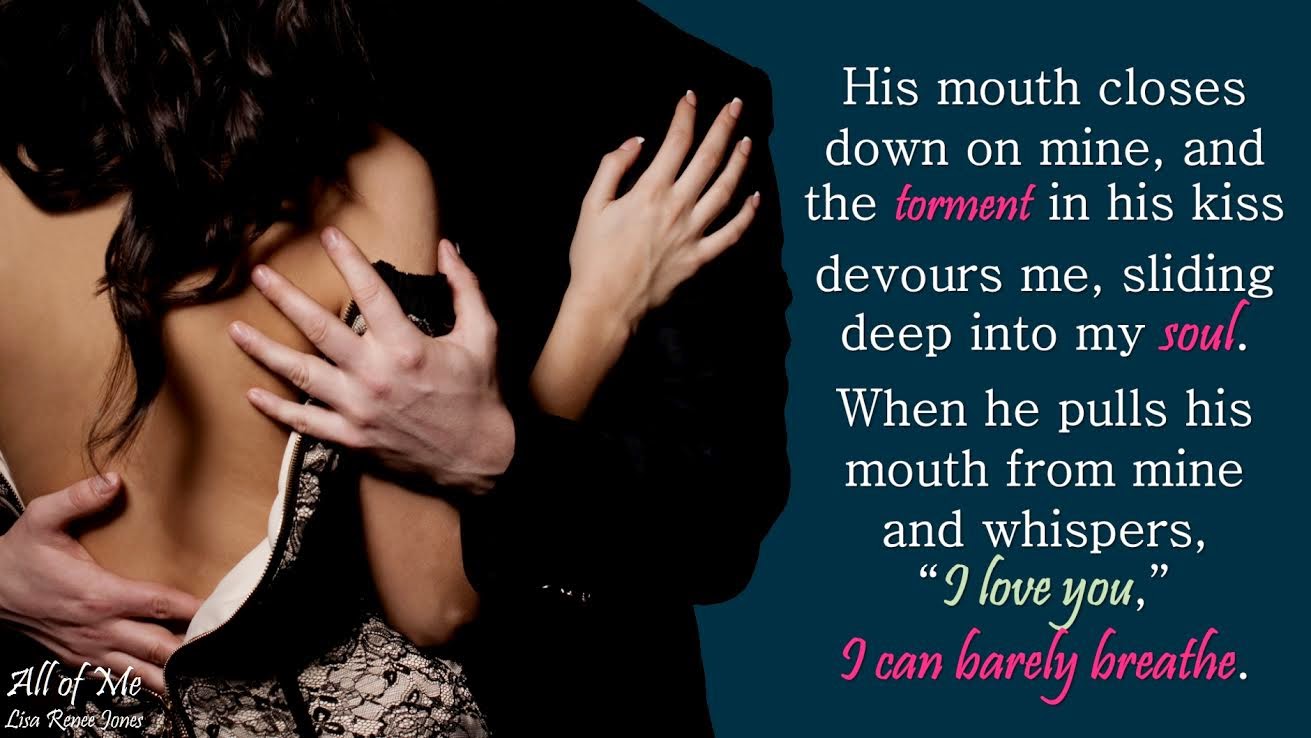 I blink up at Mark, who’s as tall, blond, and good-looking as usual but unfamiliar nevertheless. “I must be in a Bizarro World where you call people by their first names.”

He smoothes the sleeve of his perfectly fitted grey suit. “What is Bizarro World?”

“You haven’t seen that episode of Seinfeld? It’s an alternate universe.”

“No, I have not seen that episode of Seinfeld, but I agree. Perhaps we are in Bizarro World, since the Sara I know likes to be called by her first name.”

“Isn’t that exactly why you always call me Ms. McMillan?”

“Perhaps I can’t stomach the idea of calling you Mrs. Merit.”

I grin. “Why don’t you wait until Chris walks in to give him a hard time?”

His lips curve into what is almost a smile, and I know I’ve busted him. “Because he doesn’t take my bait the way you do.” 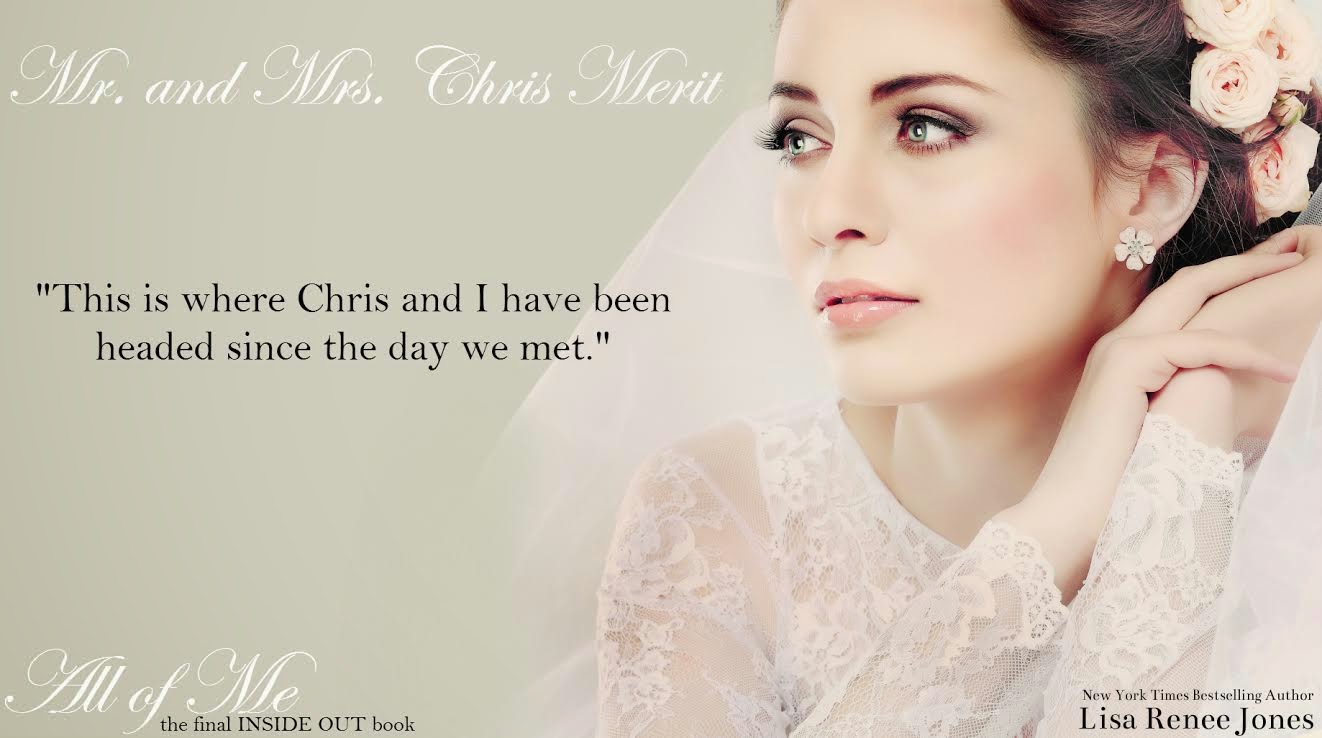 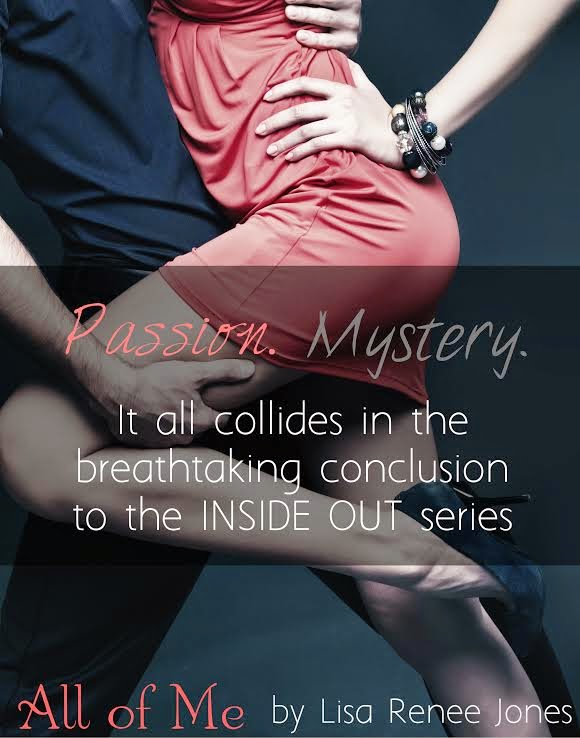 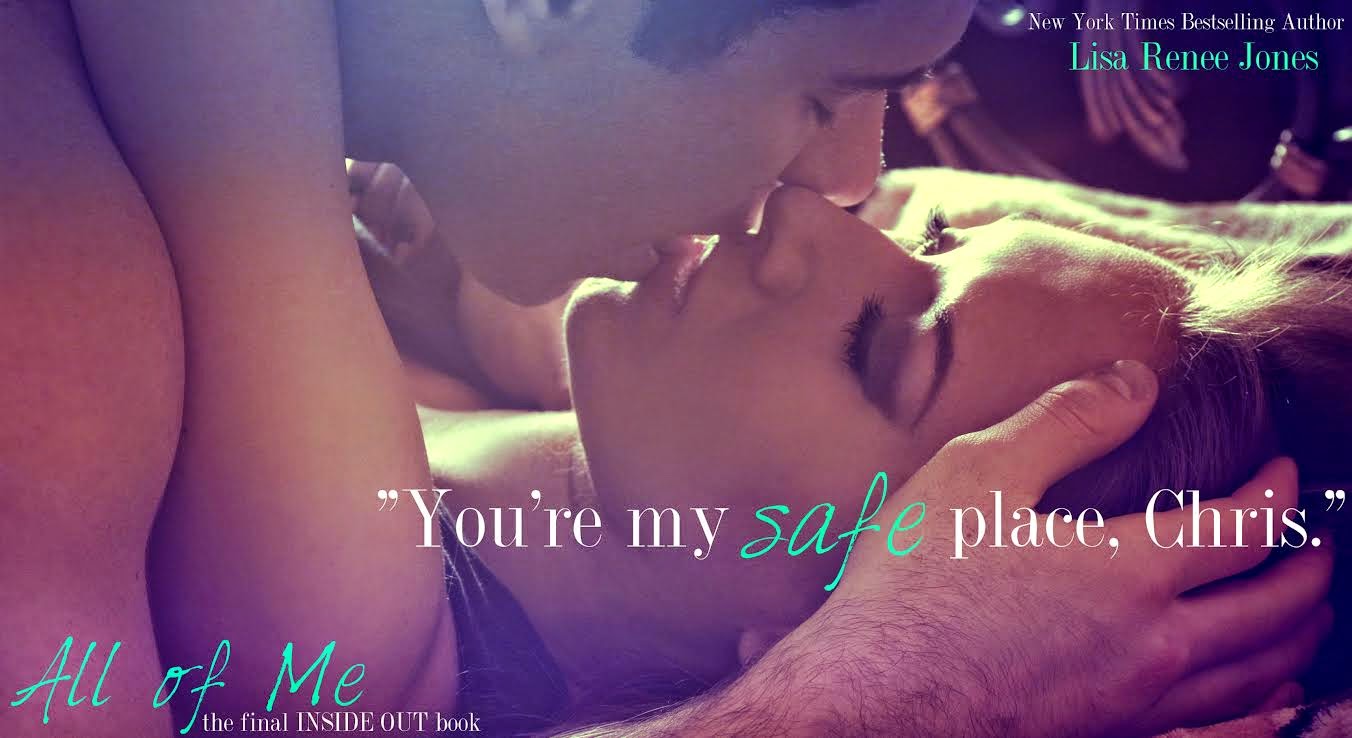 Haven't started the INSIDE OUT series yet? Get the first 4 chapters of IF I WERE YOU plus BONUS CONTENT FREE for a LIMITED TIME ONLY! 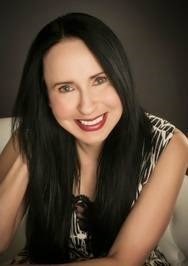 New York Times and USA Today Bestselling author Lisa Renee Jones is the author of the highly acclaimed INSIDE OUT SERIES, and is now in development by Suzanne Todd (Alice in Wonderland) for cable TV. In addition, her Tall, Dark and Deadly series and The Secret Life of Amy Bensen series, both spent several months on a combination of the NY Times and USA Today lists.

Watch the video on casting for the INSIDE TV Show HERE

Since beginning her publishing career in 2007, Lisa has published more than 40 books translated around the world. Booklist says that Jones suspense truly sizzles with an energy similar to FBI tales with a paranormal twist by Julie Garwood or Suzanne Brockmann.

Prior to publishing, Lisa owned multi-state staffing agency that was recognized many times by The Austin Business Journal and also praised by Dallas Women Magazine. In 1998 LRJ was listed as the #7 growing women owned business in Entrepreneur Magazine.

Posted by JBs Book Obsession at 12:09 AM No comments: