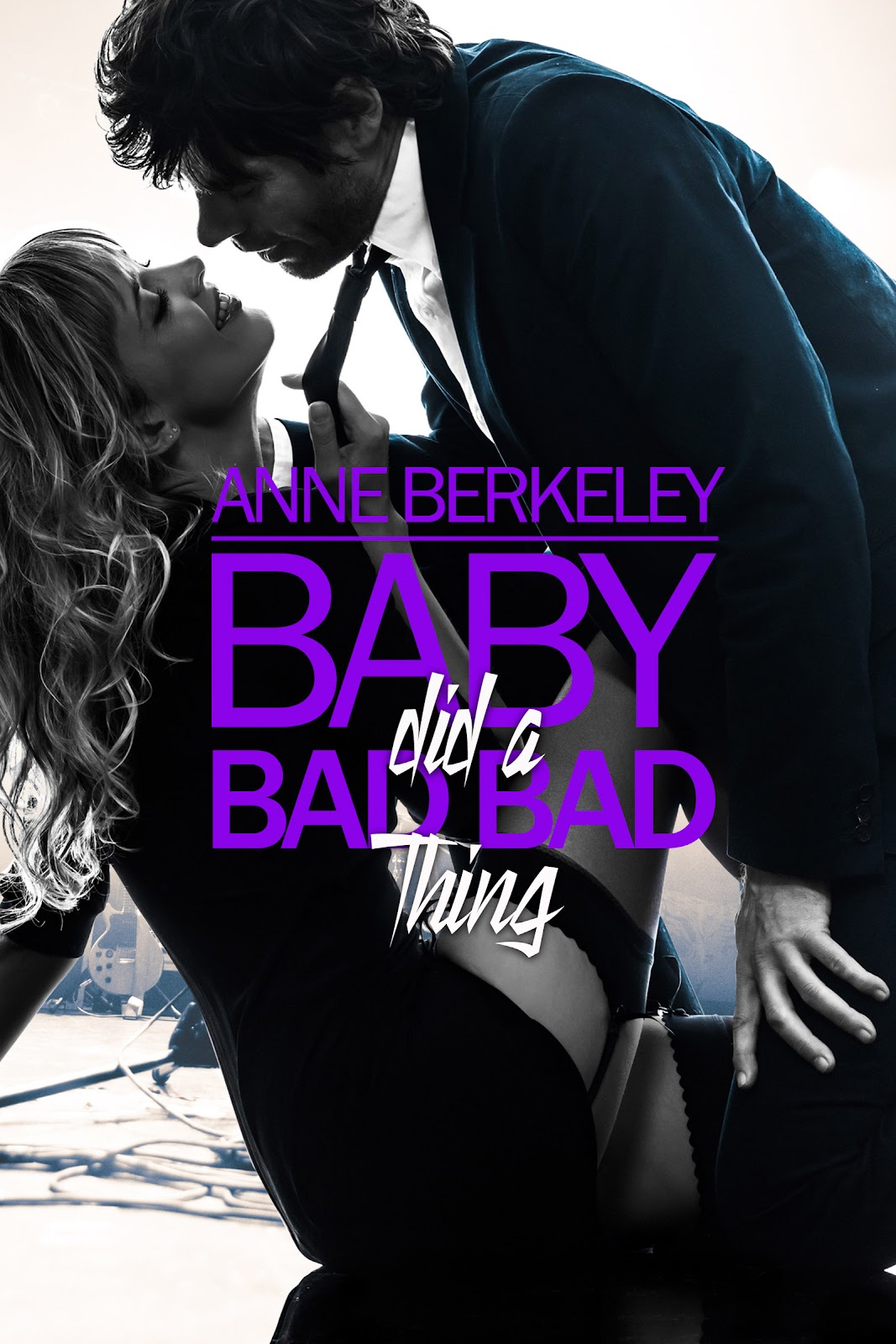 Synopsis
Baby Did a Bad Bad Thing: Hautboy Series Book 3
Paisley Shaw has rules about dating.  Coworkers and bosses are strictly off limits, and for good reason.  She has too much to lose, like her job, her apartment, and ultimately her newfound independence from her twelve—yes, twelve—siblings.  But surely the innocuous medical student, Henry Powell, couldn’t do any harm.  Or is he just a stepping stone to larger transgressions?
Jake Whalen has his own set of rules.  No sleeping with relatives of bandmates or stage crew.  No ifs.  No buts.  No excuses.  He instilled the rules for a reason.  Keyboardist for the infamous rock band, Hautboy, he’s followed them to the T in order to keep his little sister off the playing field.
When one wittingly crosses the line, they’ll both face the consequences.
But rules are made to be broken.
And perhaps the sting of discipline can be enticing. 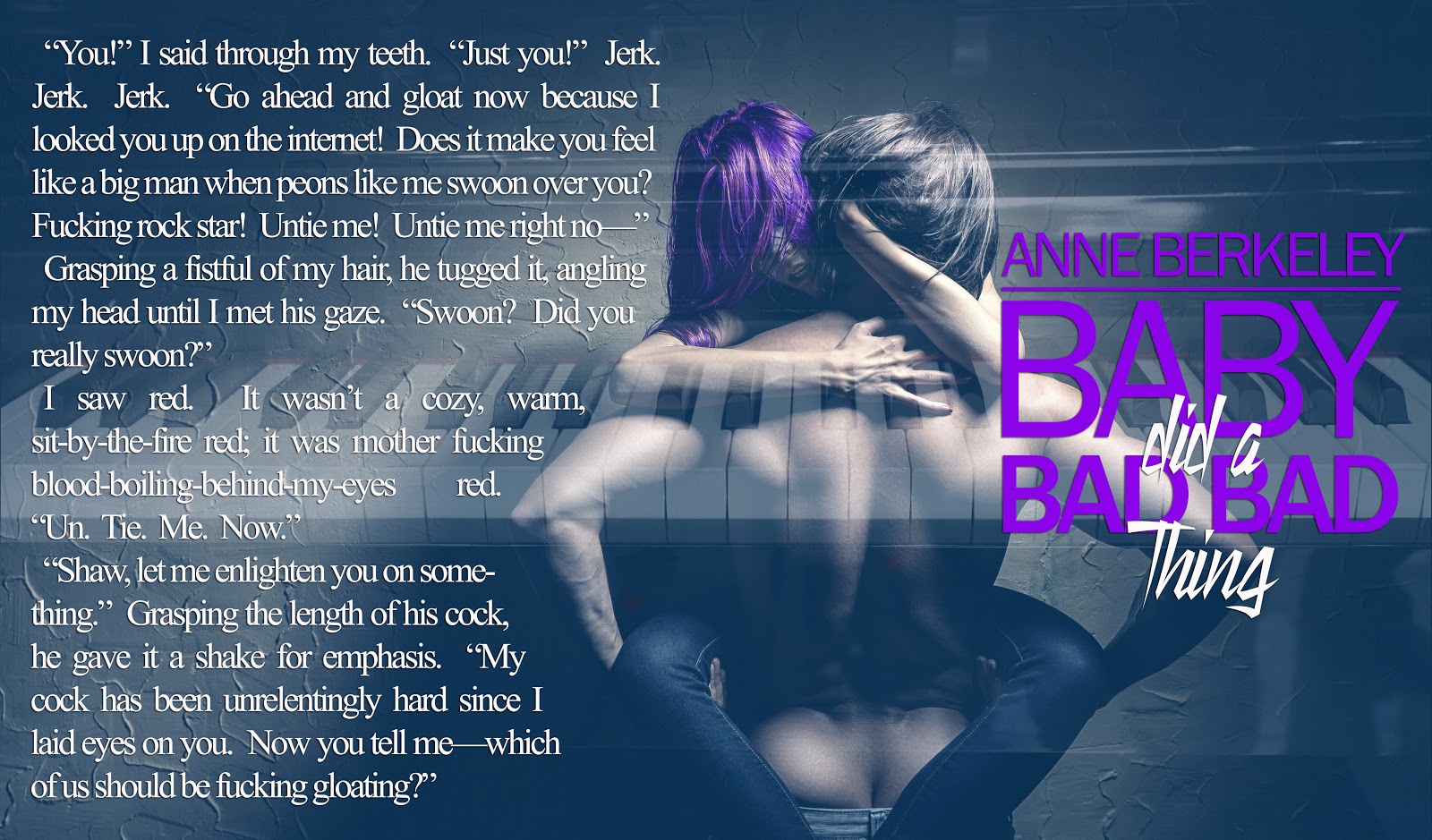 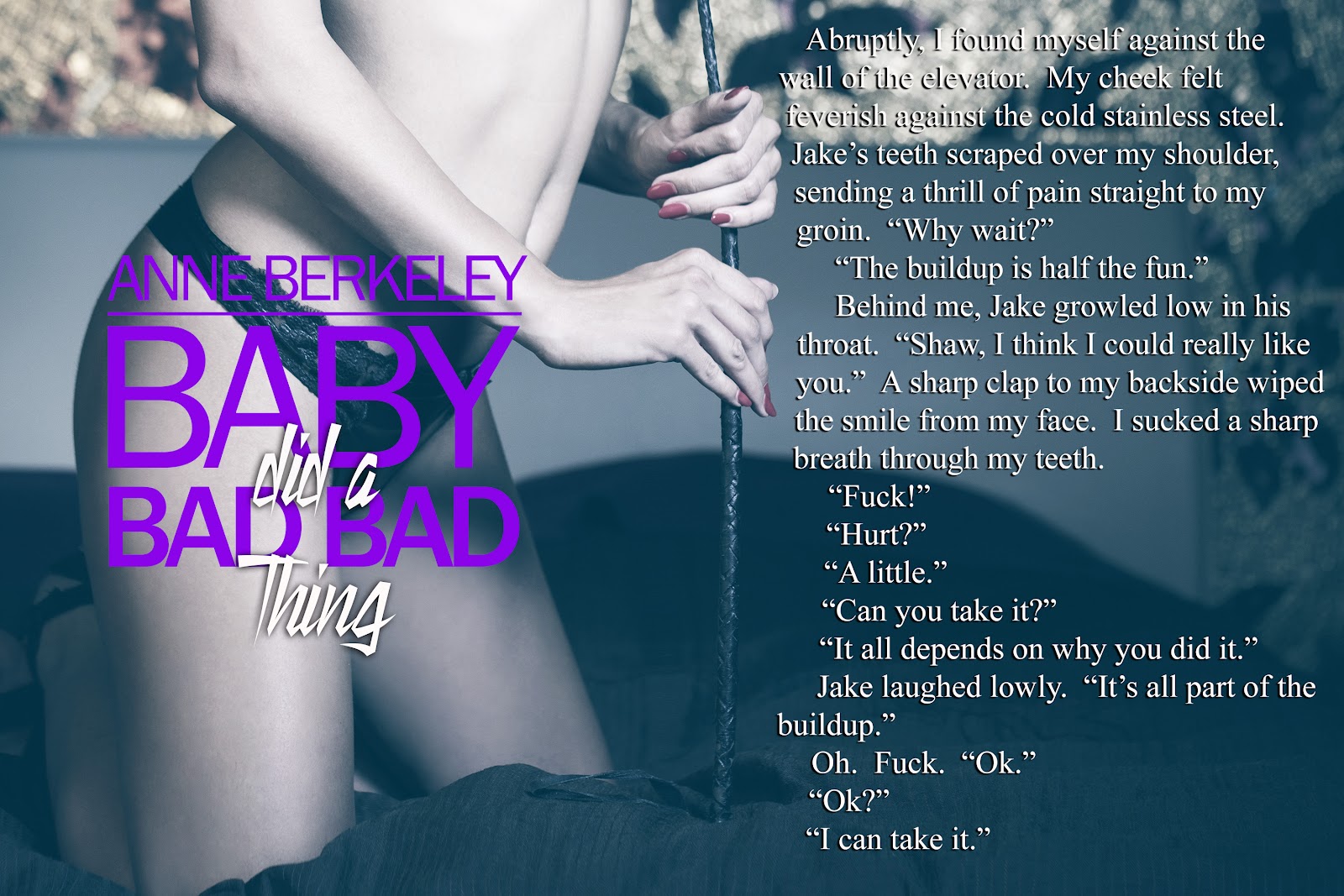 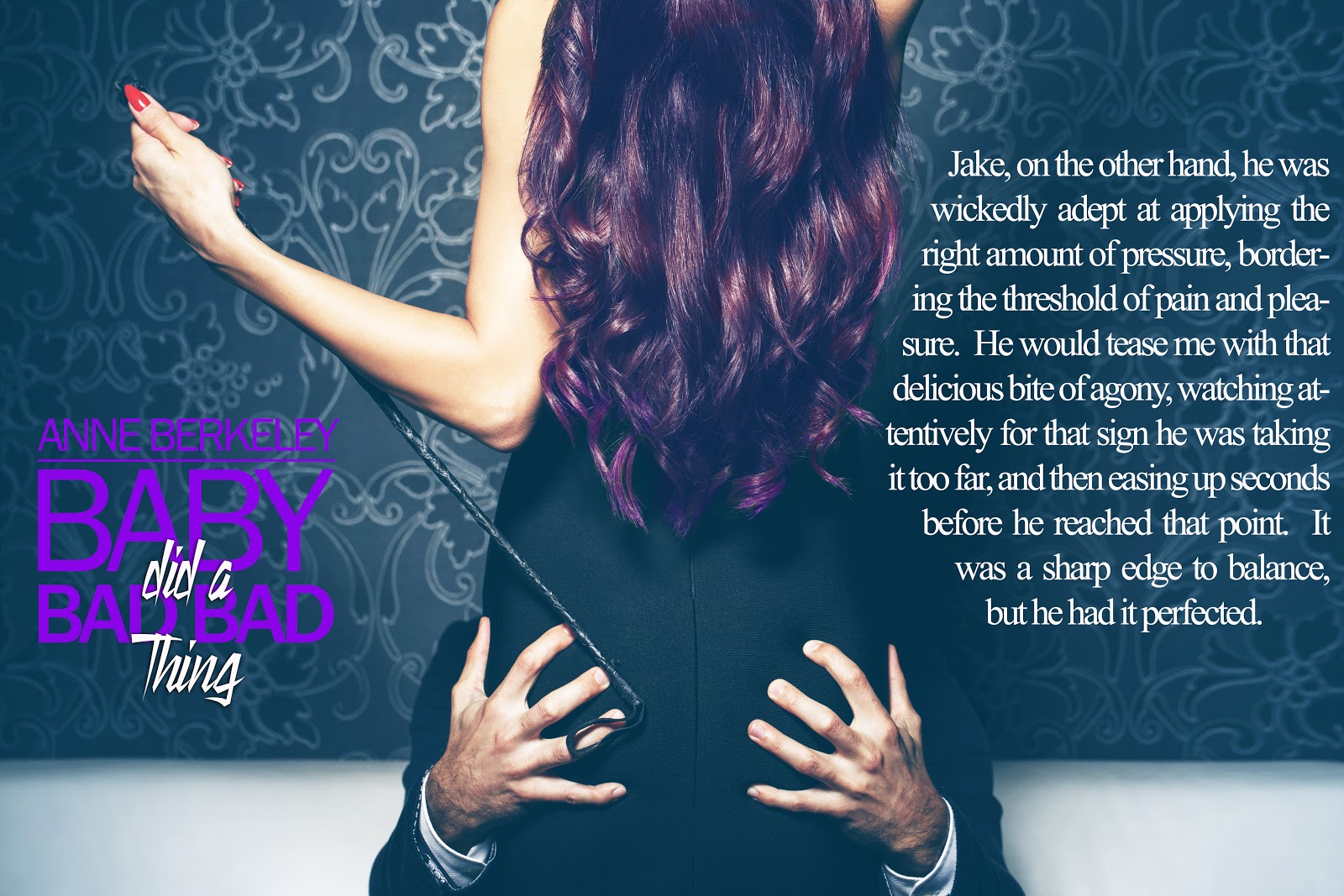 Other Books by Anne Berkeley

Someone to Watch Over Me
Book 1 in the HautBoy Series 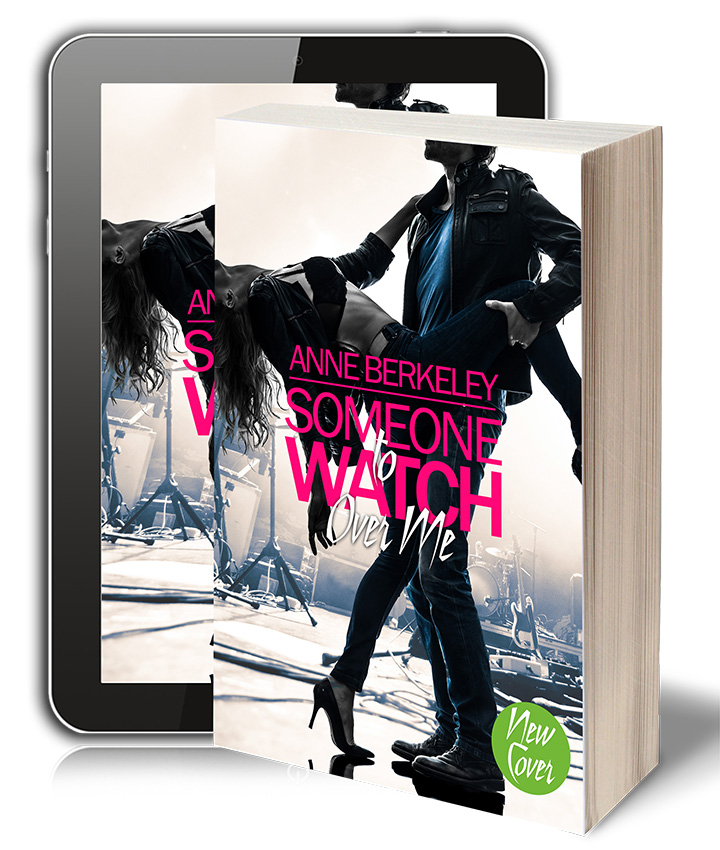 Synopsis
On the run from an abusive relationship, Cooper Hale has gone to great lengths to protect her son. That includes giving up her dreams of a music career for a life of anonymity.
All of her best-laid plans crumble, however, when she meets rock star, Tate Watkins. After giving into her whims and indulging in a one-night stand, she finds cutting him loose isn't so easy.
Her rash and impulsive decision snowballs into a series of events that sends her life spiraling out of control. Cooper can do little but hang on for the ride, and one wild ride it is.
Danger looms at every turn as her past returns to haunt her. With the man of her dreams and the career she has always wanted within her reach, she’ll need to survive if she’s to seize them.

Breaking the Habit
Book 2 in the Hautboy Series 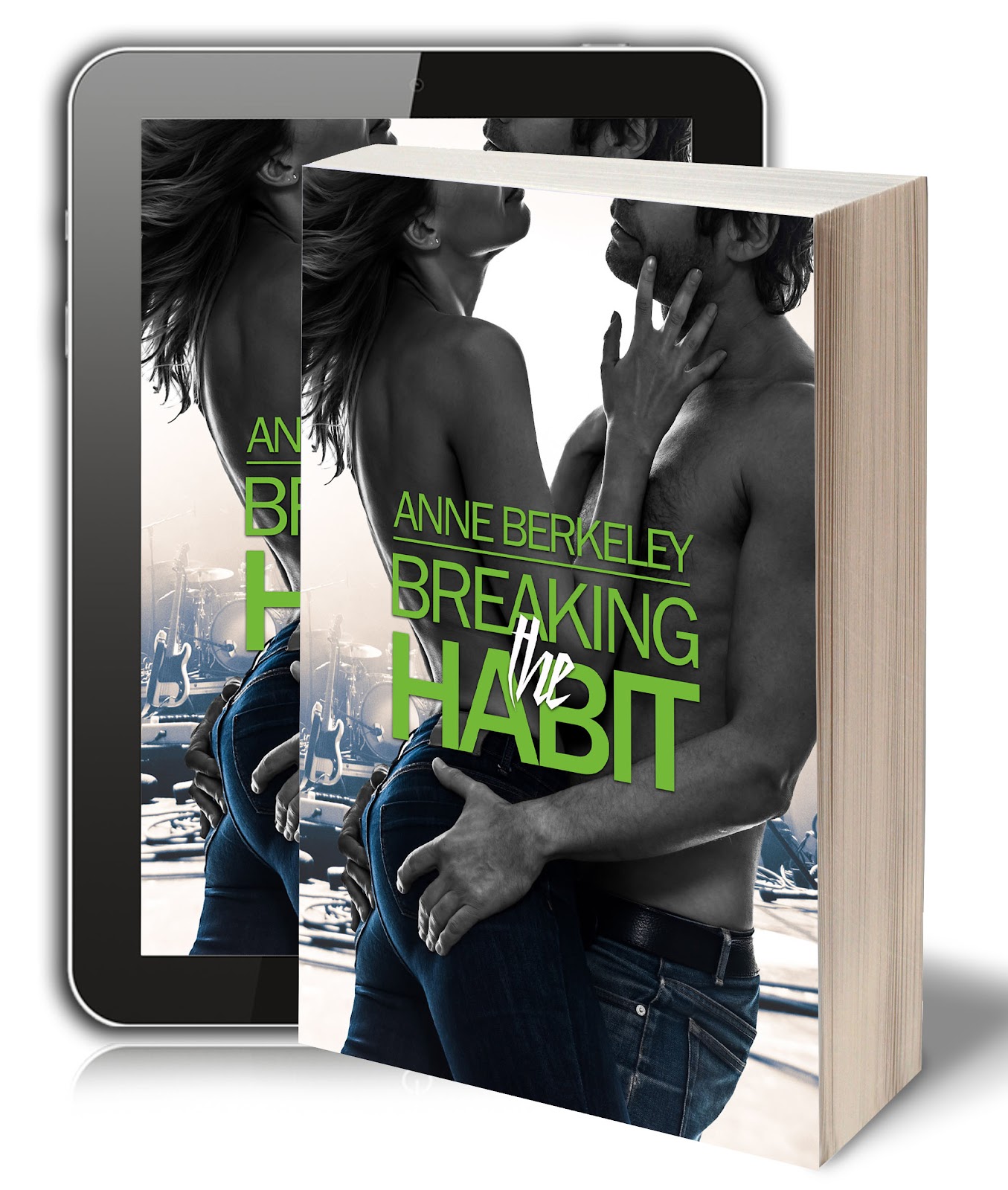 Synopsis
Barely escaping her marriage alive, Emelia Cipollini has resolved to live a quiet life in the countryside, but fate has other plans.  With her ex out of prison, the loss of her job, and a heartbreaking rejection, all arrows point toward a new beginning in Seattle with best friend, Cooper Hale.
Shane Richardson, drummer for world famous rock band, Hautboy, complicates things.  His habits are anything but conforming to her lifestyle, but when the bad boy plays it straight, will he stay off the drugs and alcohol long enough to win her trust, or will he become a repeat of her past?

About Anne Berkeley
My name is Anne Berkeley. I'm a full time cubicle dweller, wife and mother of two beautiful children. I do all things creative. Photoshop, photography, scrapbooking, decorating, barbering, and I would like to think...writing.

I dream up most of my material during my seventy-five minute commute to work. Some of it comes to fruition and other times it's edited out again. But I hope that what made the cut is worthy of note.

I write paranormal romance novels for adults. No not erotica. Though there are some steamy scenes. I'm working on several novels at the present. Yes, more than one. I jump back and forth as my mood dictates. It's the way I work best. Tempestuous, my first novel, released in 2012, Torrid in 2013 and Feral, the first of a new series in 2013. I'm working to complete Turbulent (Third and final novel for the Tempestuous series), a second novel for the Feral series, and two standalone novels.

Release Blitz: After the Scrum by Dahlia Donovan 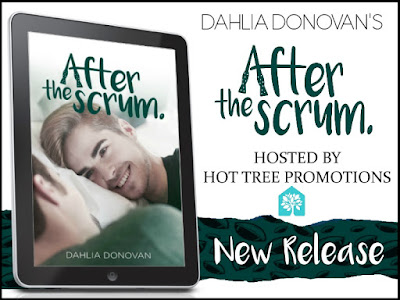 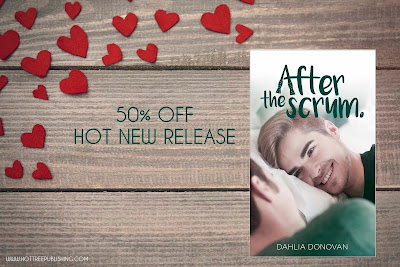 Caddock ‘The Brute’ Stanford lost his brother and rugby career within the same year. The once man-about-town is now a has-been and guardian to his young nephew. Not sure where life will go after the scrum, he decides to purchase a pub in the Cornwall village of Looe. He never expects to fall in lust—and then love.

Francis Keen hides his crippling anxiety behind his eccentric habits, lush interior design, and beloved dog, Sherlock. Alone by choice after an attack in college left him emotionally scarred, he lives by the sea with his gran, resigned to working small jobs for local businesses. Revamping the pub for the new owner is right up his alley—especially when he realizes who the owner is.

Two men, so different, on track for a romantic collision. Can they survive the impact?

Amazon: US I UK I AU I CA
Nook I iTunes I Kobo I ARe

Read more »
Posted by JBs Book Obsession at 9:00 AM No comments: