Lily Brook works in men's underwear, but she would love to get Jack Stewart out of his.

Lily hasn't dated anyone worth writing home about for years. So when she meets the impossible and impossibly handsome Jack Stewart--well, you could say he piques her interest. It doesn't matter that he's the cockiest asshole this side of the Mason-Dixon line.

Jack Stewart is destined for success. With his designer suits, intense hazel eyes, and penthouse apartment, he's the total package. But he's also the manager of Hamilton's Department Store--the store where Lily could make or break her career. He would never fraternize with an employee. And there's no way in hell Lily would risk her job on the hottest guy in Philadelphia. Right?

But she can't stop imagining what he'd look like in a pair of Flash Fit's sexy male underwear...

He shouldn't dip his wick in the company's ink, but he can't resist Lily's curvaceous body and wacky charm. He wants Lily--in the break room, the dressing area, everywhere.

Making a move on Jack could end her career. But can Lily resist his Hard Sell? 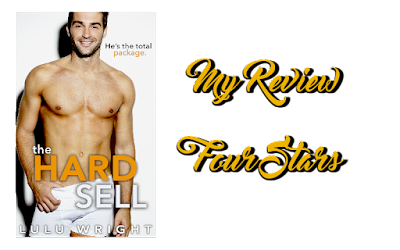 Lily and Jack are as different as night and day. You would never think these two would make a smoking hot couple. When they first meet they literally collide into each other. When they find out the have to work together for the next few months more than sparks fly between these two hot headed, strong willed people.

I really enjoyed the banter between these two. Lily is a strong female character with her career in mind. She knows what she wants and intends to get it, nothing will stop her from getting the promotion she deserves. Especially not Jack, with his hot body and his annoying clipboard.

Jack is determined to make run his store the way he wants keeping with the traditional look and feel of the store. When Lily and her manties come walking into his life all hell breaks loose and he soon realizes she's what he needs.

This was my first book by Lulu Wright I will definitely check out the rest of her work you should too.

Lulu Wright is a sushi eating lover of Broadway shows, long walks on the beach, and sexy book boyfriends. After working in retail for ages, she's proud to put her hilarious experiences to paper in her first romance novel, The Hard Sell

Posted by JBs Book Obsession at 8:29 PM No comments: