Cobra
I’ve lived two lives.
One full of innocence and one full of sin.
I mourned the perfect life I was born into and made it my duty to chase the phantom who stole it from me.
Revenge, mayhem, and loss are all I know.
I am the lone man—I am the wanderer.
The former nomad—now, Satan’s deadliest soldier.
The two worlds were never supposed to collide. Innocence and sin aren’t made to coexist yet somehow my past bleeds into the present and I find myself facing my biggest regret…I find myself face to face with her—the girl who got away.
The girl I let go.
The woman I’ll ruin if I stay.
Celeste
Our young love was marred by violence.
Our guilt destroyed us, fate tempted us but, it was he who broke us.
They say time heals all, but all time did was dull the ache of his abandonment.
Now, dressed in leather, covered in ink the boy I mourned is now a man—a man tormented by his demons.
In another life, we were everything to one another.
In this life we’re strangers.
*NOTE* Each book in the Nomad series can be read as a STANDALONE. 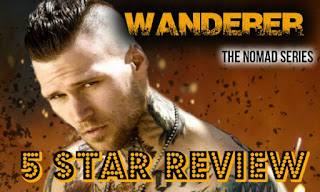 Cobra and Celeste quickly have become one of my favorite romance couples.
This is a couple that when life keeps throwing obstacles at them they push through and come out the other side.

In this second installment of the Nomad series, Janine once again waves her magic writers wand and brings us a heart-stopping action-packed loved story. Cobra and Celeste's story is not for the faint of heart, it's gritty and unapologetic. Cobra is a badass biker seeking retribution at the cost of his own happiness. Leaving Celeste his childhood sweetheart and love of his life behind he will wander the world searching for the man who torn his family apart when he kidnapped his twin sister. The quest for revenge consumes him, letting Celeste go was for her own good. They meet again and passions ignite in one night of hot sex and tearful goodbyes. But it's not over folks...no the universe and Ms. Bosco have plans for this couple that will keep you on the edge of your seat.

When they meet again years later, secrets are revealed and promises are made. Cobra and Celeste were born to be together forever. The true definition of soulmates. Cobra realizes quickly that he doesn't want to let Celeste go again. He wants to leave retribution behind and have her in his arms. But our girl Celeste isn't going to just fall at his feet, she makes him work for it. I adored her and I want to be her friend! She was awesome.

Janine really hit a grand slam with this one. Wanderer will bring you in and never let you go. At times you will cry, other times the steam coming off this couple will be too hot to handle. I felt every emotion possible while reading this book and I loved every minute of it.

If you are a fan of the Tempted series you will adore being able to meet up with the Satan's Knights again. If you haven't read the Tempted Series go and get it you will not be disappointed.

Every chapter flows, every word leaps off the page, twists, and turns, love, and laughter this book has it all.

RECEIVED AN ARC FROM INDIE SAGE IN EXCHANGE FOR AN HONEST REVIEW.


DON'T MISS THE BIKER FULL OF DIRTY PROMISES! GRAB YOUR COPY OF #DRIFTER, BOOK #1 IN THE NOMAD SERIES!

I’m a drifter.
A man born to ride through this world alone.
There used to be a time when I thought I was the rescuing type. I enlisted in the Marines and made it my duty—I was going to save lives.
I was going to be a true American hero.
But God had another plan.
Or maybe Satan did.
For everything I touch finds mortality.
I’m no hero.
I’m nothing.
I’m a veteran biker, a former nomad who survived war only to live in hell.
Now I ride with the Satan’s Knights of Brooklyn and I’m drifting into a different kind of chaos.
The kind that revolves around a pretty girl with intoxicating green eyes.
A girl who has the power to turn me inside out.
A girl who doesn’t need anyone to rescue her because she’s her own savior.
Until she’s not.
But a man plagued by war and the devil inside him can never be her hero.

Strong. Independent. Fierce.
They are the three things I strived to be.
But sometimes being successful can be lonely.
Sometimes a girl just wants to be a girl and have someone take care of her.
Maybe even love her.
Sometimes the strong become vulnerable.
Or worse, the victor becomes the victim.
Sometimes we lose control or in my case, it’s stripped from you.
Defeated. Broken. Haunted.
They are the three things I have become.
In my darkest hour, I admit defeat.
In my darkest hour, I need one person.
I need him.
Stryker.

Janine Infante Bosco lives in New York City, she has always loved reading and writing. When she was thirteen, she began to write her own stories and her passion for writing took off as the years went on. At eighteen, she even wrote a full screenplay with dreams of one day becoming a member of the Screen Actors Guild.

Janine writes emotionally charged novels with an emphasis on family bonds, strong-willed female characters, and alpha male men who will do anything for the women they love. She loves to interact with fans and fellow avid romance readers like herself.

She is proud of her success as an author and the friendships she’s made in the book community but her greatest accomplishment to date would be her two sons Joseph and Paul.

Posted by JBs Book Obsession at 10:31 PM No comments: