You can also order SIGNED print copies of the Quantum trilogy now at marieforce.com/store (best price in print). The books will be available in audio on release day--or that's the plan anyway!

ABOUT The Quantum Trilogy:

He’s a sexual dominant. She’s sworn off sex. There’s no way they can make a relationship work—or can they?

After surviving a traumatic event at age fifteen and the ensuing estrangement from her family, Natalie Bryant has worked for years to reinvent herself into the woman she is today—a happy teacher fresh out of college and enjoying her first winter in New York City with her faithful dog, Fluff, by her side. Natalie isn’t expecting her life to change completely during a routine stroll through Greenwich Village on a blustery January day. But when Fluff breaks loose and charges into a park, Natalie gives chase and crashes into her destiny. Only after Fluff bites and draws blood from the man who accidentally knocked Natalie down does she realize Fluff has bitten the biggest movie star in the world.

He has no business being enthralled by the gorgeous, young, innocent teacher…

Natalie captivates Flynn Godfrey from the first moment their eyes meet while she is lying on the ground and he’s fighting off her ferocious little beast of a dog. The only thing Flynn knows for certain is if he lets Natalie get away, he’ll regret it for the rest of his life. After only a short time in her presence, Flynn is prepared to change who he is to be what she needs. He knows he’s in big trouble when she says she won’t sleep with him and he doesn’t care if it means he gets to keep her in his life. But can he turn his back on the lifestyle that has defined him? Can he deny the desires that drive him to give Natalie the introduction to love and romance she so deserves? And most of all, can he keep his truth hidden from her long enough to have forever with her?

Join Flynn and Natalie as their story unfolds in three full-length books released three weeks in a row: VIRTUOUS, VALOROUS and VICTORIOUS. From New York to Los Angeles, from Hollywood to Las Vegas, Flynn and Natalie’s whirlwind love affair has it all—romance, passion, steamy hot sex, relentless paparazzi and a murder that could be their undoing.


And now, a little something from VALOROUS....

She’s so nervous her hands are shaking as she takes the wheel in the silver Mercedes sedan she admired when we were here for the Globes. I told her it was hers to use whenever we were in LA, and that’s when she said she didn’t know how to drive.

My poor sweet Natalie missed so many of the rites of passage the rest of us take for granted, and I want to make it all up to her, starting with teaching her how to drive.

“What if I hit something or damage the car? You love your cars.”

From the passenger seat, I take hold of her hand and wait for her to look at me. “I don’t love my cars anywhere near as much as I love you.”

Raising a brow, she says, “Even the Bugatti?”

She’s bringing out the big guns. I swallow hard. “Even the Bugatti.”

She loses it laughing. “You lie. You love that car more than anything.”

“No, sweetheart, I love you more than anything. The cars are things. They can all be replaced. And they’re insured. Fully insured.”

“I’m positive. I want you to know how much fun it is to drive and to be able to go anywhere you want whenever you want.”

We’re in the Quantum parking lot, where there’s plenty of extra room to practice the basics. I go over all the features of the car and tell her where everything is. “Driving is all about being predictable. Whatever you do, it should be what the guy behind you you to do. Does that make sense? In other words, you don’t stop at a green light or in the middle of a turn or anything that’s going to get you hit from behind.”

“Go slow at first, until you get a feel for the car and what it’s capable of.”

“I can’t believe the first car I’m ever going to drive is a Mercedes.”

“Mine was a Jaguar. My dad was a freaking mess the whole time. I accused him of being far more concerned about the car than he was about me. He didn’t deny it.”

The story makes her laugh, as I hoped it would.

“You’re sure about this?”

“Positive. Take me for a ride, sweetheart.” I a wink and a smile to remind her of the last time I said those words to her, and she blushes adorably.

Cole Bradley never felt as if he belonged, which is literally the story of his childhood. But you would never know that from his arrogant attitude, and playboy charms. He can have any woman who crosses his path. Working as a VIP Companion gives him the freedom to come and go as he pleases. No commitment. No problem. Until he hooks up with an older, beautiful woman named .

McKnight has worked hard to get to where she is today as an art gallery owner and broker. When her husband left her for another woman, she decided to give up on love and put all her time and money into her business. still yearns for a man's touch. But nothing permanent. Then enters Cole. Too sexy. Too young. Too desirable.

What starts out as a working relationship turns personal and very addictive. Cole will have revealing her naked desires.

Note from author: This is part one of Naked Desire. Naked Desire is a three-part novella.

Naked Desire: Part Two. Cole and Ren's undeniable desire for one another continues...

Cole now knows the reason left him seven years ago. It still doesn't change the way he feels for her. If anything, he wants more...

fights her true feelings for Cole. Whenever they are together, her desire for him is hard to resist. But will Ren let one failed relationship keep her from a chance at true love?

The odds are against them; as they must first survive more secrets, and temptation

Secrets are exposed. Cole and Ren's second chance, may be leading to irrevocable disaster...

If decides to put her trust into the past, she may unknowingly lead Cole right into another woman's bed.

Lies, Betrayal, and Seduction. It might be time for Cole to move on. But will he let go?

Note from Author: This is part three and the final book of Naked Desire. This book is intended for adult readers due to sexual content and mature language. 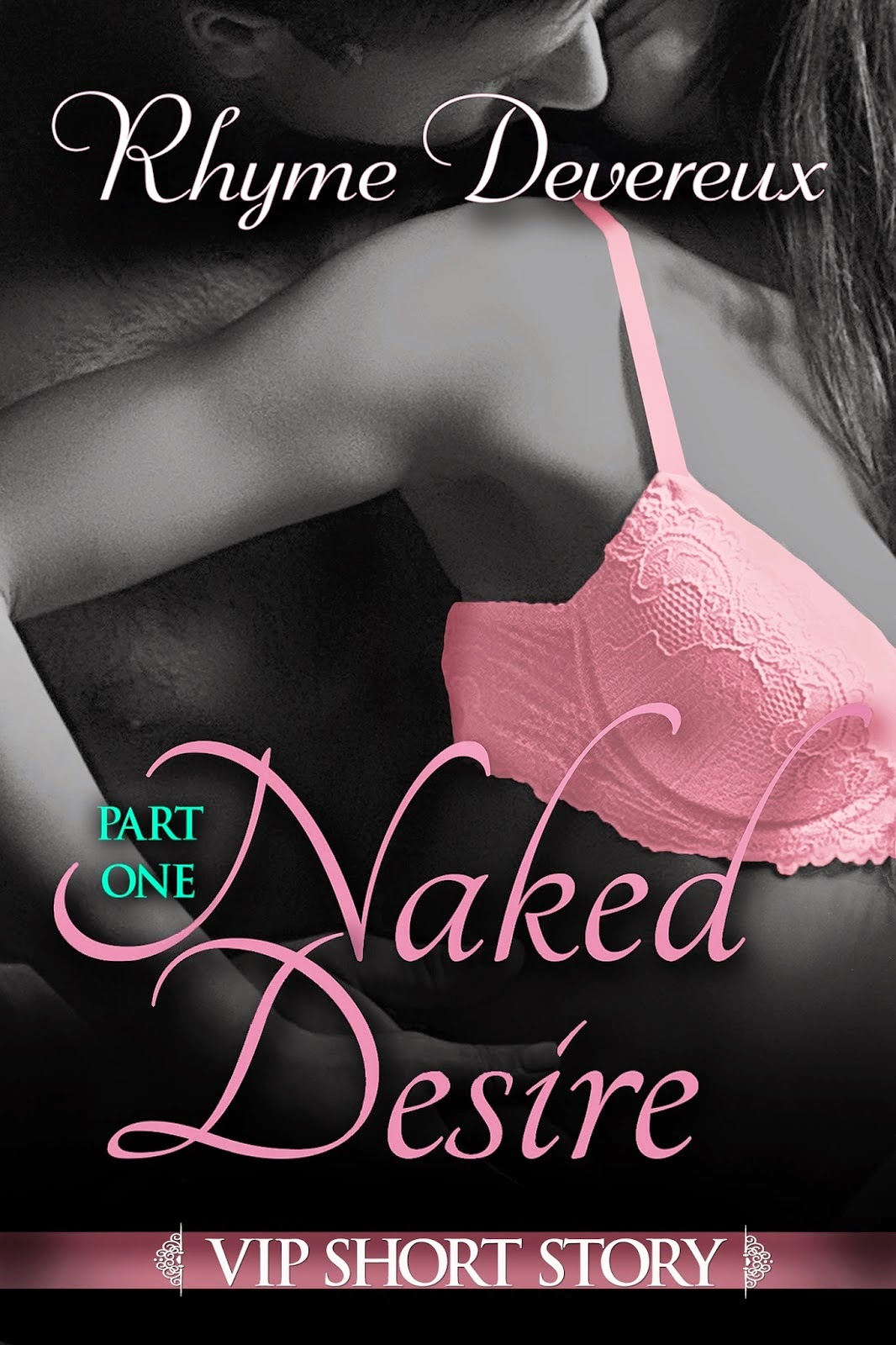 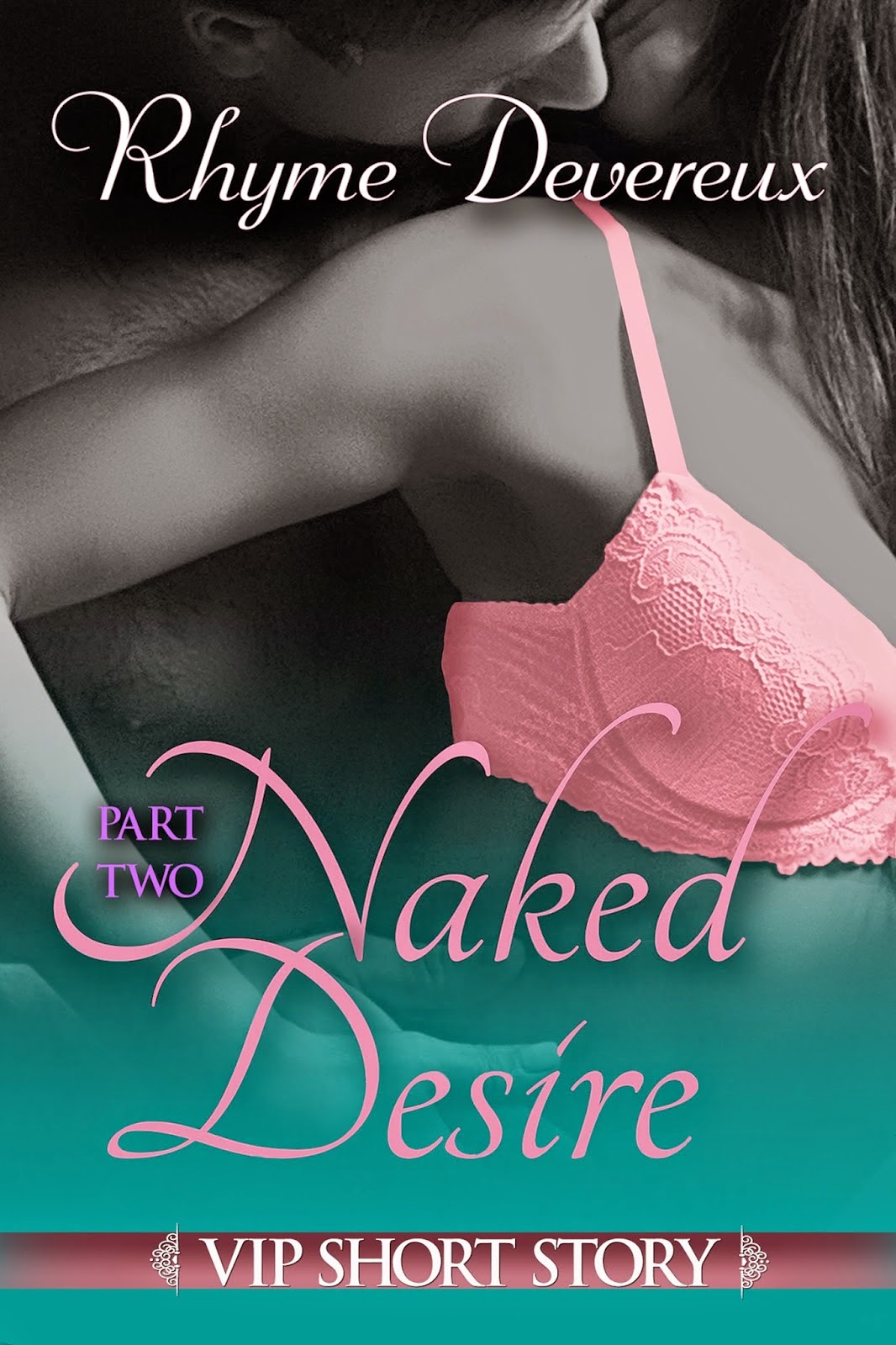 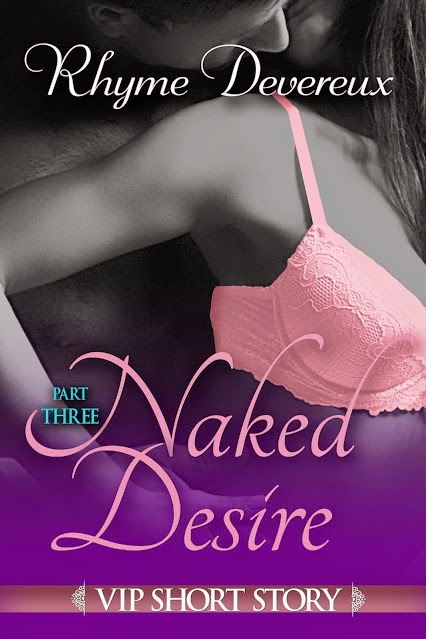 
Cole is a college student who grew up never feeling like he belonged.  When he was a kid, he lost his parents and a couple adopted him they gave him food and a roof over his head but not love or affection. Therefore, it’s not surprising that he falls for Ren his teacher, she turns out to be twenty-seven to his twenty. Cole and  build a hot and heavy romance until she cuts it off and breaks Cole’s heart.  Years later by a huge coincidence, they meet again and sparks fly immediately.  Cole and  have a second chance at love? Will Ren’s insecurities about their age difference get in their way? Or will it be Ren’s ex-husband or one of Cole’s random bimbos stepping in to break them apart once again? 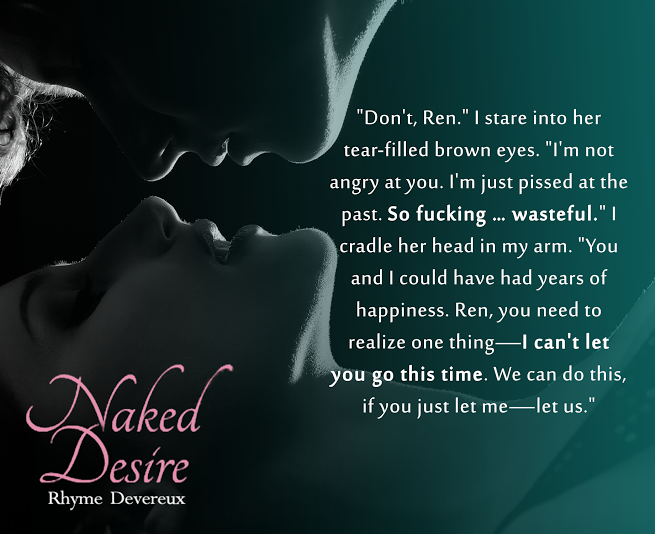 As I read these three novella’s I flipped between a 3 star review and a four star review in my head. By the end of the last book, I settled on a 3.5 star review. Let me explain why. 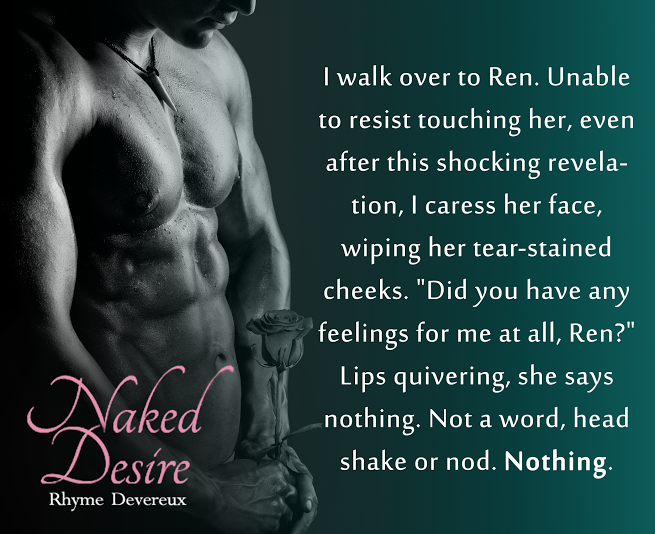 I really liked the May / December romance aspect of the story. I thought Cole and  were great together. I loved reading about them whether they were talking or having sex the heat between them jumped off the page. Cole goes from a jerk who just sleeps around to a sexy as sin guy who wants nothing more than to convince the love of his life that they belong together. 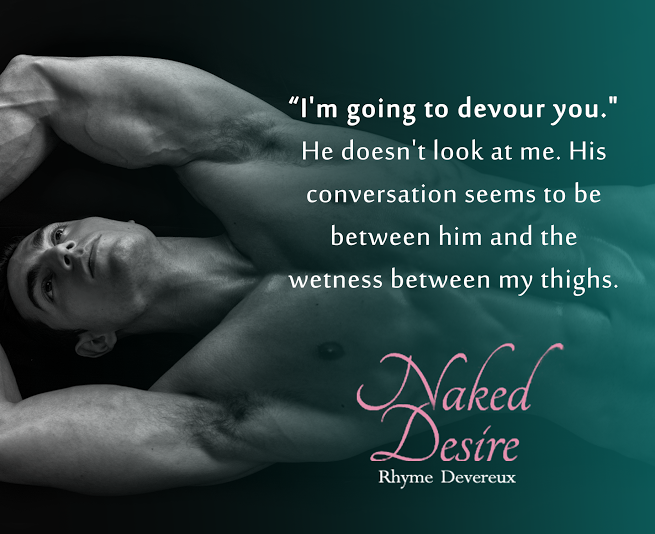 What I didn’t like was that the characters were missing something for me. Maybe it was because the novellas were short; there wasn’t enough time to develop deeper characters. I found myself wanting to know Cole and  when they first met. The way the author told that background story of the characters was fantastic. If I had that story, first I think these novellas set years later would have been so much more thrilling for me. Maybe if it were written as a full novel, there would have been more time to give the characters more life. There are bunches of surprises and plot twists that will definitely keep your interest.

All the characters had such great potential to be these amazing full characters, but in a novella, there just isn’t enough time for that kind of character development. The author ties everything up nicely at the end and that’s why I went with the higher rating. She really did a great job writing an interesting story and again, my favorite was the older woman, younger man scenario. 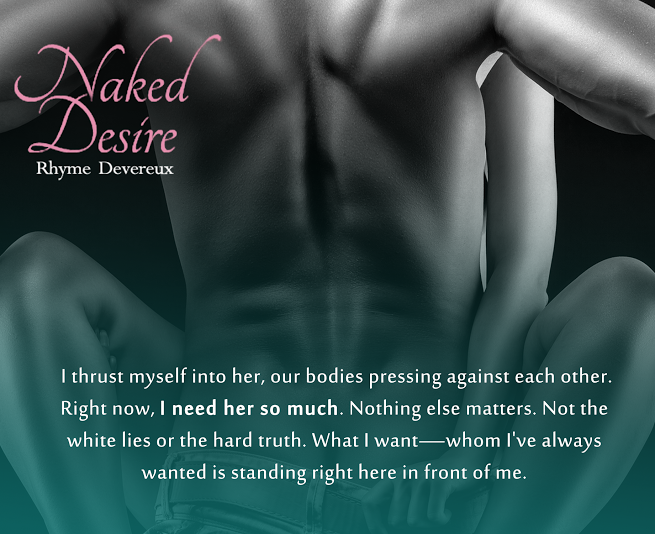 These were the first books from Rhyme Devereux that I have read she certainly knows how to do a scorching sex scene the public ones were swoon worthy. I would definitely read her books again; I just would like her to show me more from the characters.  If you are looking for a good storyline with an older woman, young man , steamy sex, betrayal, lies and a little blackmail  you will like these quick reads. 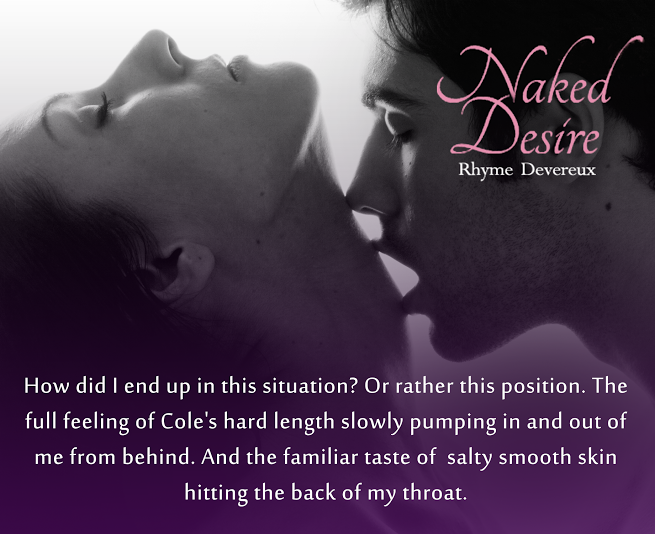 Rhyme Devereux is an adult romance writer. She is married with children, and two dogs living in Pennsylvania. fter turning a certain age, Rhyme realized that she's a late bloomer (and wears that label with pride). Her passion for reading transitioned into writing romance books to share with other readers.

When she's not writing or daydreaming about characters, and plot twists, you can find Rhyme being a housekeeper, tutor, chef, referee, loving mother, and wife. And if she has some spare time, you will catch her lying in bed wearing holey pajamas, while reading a good romance or mystery-thriller.

Thanks for wanting to get to know Rhyme better. But by far, her books are much more exciting.