His club is demanding answers. His sister is missing. Noah needs to draw on every ounce of strength in that muscled body. It's not the time for him to let anyone see he's more than fists and ink.
Sometimes I catch a glimpse of the man behind the cold, hard mask. Something like caring. Something like kindness. I live for those moments.

Noah's sister is missing taken by a rival MC. He needs to concentrate on finding his sister. The club wants to know why he killed their president and what does this chick Star have to do with it. He's claimed her as his own, but will he have to choose her over his club brothers.
Star and Noah have been dancing a fine line between lust and love from the moment they meet. Noah keeps telling Star he's bad stay away "run" but she refuses to leave his side. Something about him makes her feel safe and protected. No one has ever protected her or tried to take care of her she finds herself drawn to him. When he feeds her breakfast my heart just melted picturing this hot biker taking sweet care of his girl. How could she not want to stay with him?
This is a really great little serial and I am surprised at how much I love it. Star is a serious hot mess, but at the same time she is a tough cookie. She's been through a lot in her young life, including abuse at the hands of her mother's boyfriends. When she meets Noah the circumstances surrounding their meeting are certainly questionable, but she soon finds out dangerous or not he is exactly what she needs. Noah fights his feelings for Star he is always trying to make it as if what they have is a "for now" kind of thing but his actions speak louder than words. I really loved reading, the bond they are creating with each other he will protect her and she will always have his back.
I read the first three books in the in immediate succession I could not put them down. Shari Slade's writing is wonderful the story flowed so for each installment they were all quick easy reads. Yet each part of the story packed a punch and had twists and turns that kept me glued to the story. There is a little bit of a BDSM feel to the relationship and the sex in the book that I felt was well written. The author really knows how to write an erotic sex scene. The background characters are interesting as well, I hope Shari decides to write Zig and Drew's story as well as giving us some of that sexy mysterious Stone.
I am very much looking forward to the next two books. This is a five part serial book four to be released in August with book five the conclusion to release in September. If you enjoy MC books and serials this is definitely one to add to your TBR.
*Received an ARC in exchange for an honest review*

Other Books in the Devil's Host MC Serial...

Synopsis: "Do you get what you deserve?"
Under his hands or on the back of his bike--the freedom I feel with Noah is an illusion.

"No, baby. You get what you take and you keep what you can hold."

He ties me to him with fear and obligation and lust. Binds us tighter with his twisted sense of honor. I just hope his chains are strong enough to keep me safe.

Great serial, dark, erotic, sexy. Noah and Star are a hot mess, but their instant attraction to each other is undeniable. This installment Star learns the seedy side of Noah's world. It might be more danger than she can handle. When Noah is forced to hurt Star in a way she couldn't have imagined I wondered it, they would be able to move forward from it. It seems to have brought them closer together and now they are thrown into the middle of a war with a rival MC that could get them both killed. This author is new to me, I think her writing is really good and this serial has a terrific fast pace to it but still manages to hold my interest and build the main character's story. Moving on to book three this is a five part .

*Received an advanced copy in exchange for an honest review*

Synopsis: When a big scary biker shows up at Jimmy's Diner fifteen minutes before the end of my shift, covered in tattoos and looking at me like I on the menu, I should flip the open sign to closed. But I don't, because I'm too used to doing what I've been told. Too used to working and struggling and surviving to do anything different. A closed sign wouldn't stop him anyway. He's here to collect a debt. And I'm the only one left to pay.

Author's Note: Ride Me Hard is part one in the Devil's Host MC serial.

*Received an advanced copy in exchange for an honest review*

Shari Slade is a snarky optimist. A would-be academic with big dreams and very little means. When she isn’t toiling away in the non-profit sector, she’s writing gritty stories about identity and people who make terrible choices in the name of love (or lust). Somehow, it all works out in the end. If she had a it would be a platypus.
Frequently found in a blanket fort, you can also find her contributing at and on , (mostly SFW) or (mostly NSFW).
Sign up for the newsletter to stay up-to-date on all the latest releases, happenings, and events.

Posted by JBs Book Obsession at 8:12 AM No comments:

#GIVEAWAY - Celebrate July 4th with more than 30 of your favorite authors! 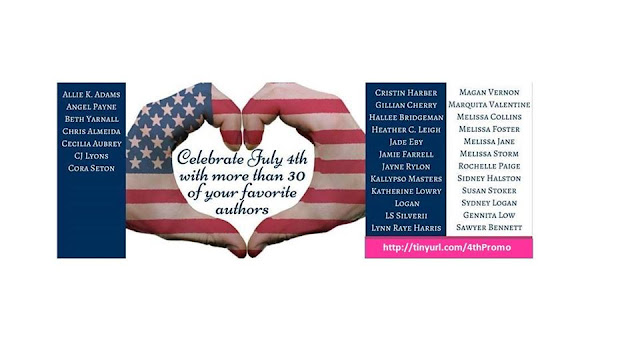 Welcome to the 30+ Author Fourth of July hop!! In celebration of July 4th, you have a chance of winning awesome prizes on different pages and a big prize on our landing page!

the first Facebook Page and continue through the pages of the 30+ authors participating in the hop. Winners will be randomly chosen to win prizes on each author page. Don’t forget to visit our landing page where all of the authors’ patriotic inspired books can be found as well as a Rafflecopter for a grand prize.
Military Celebration Landing Page

To enter the giveaway for this page:

1.** Like my page and comment on this post** (or whatever each author chooses for their page) To win a $10 Amazon Gift Card (or whatever your individual author prize is)
2.) Then hop over to the next stop, the amazing AUTHOR NAME BENEATH YOU ON THE page

3.) INSERT AUTHOR FB LINK BENEATH YOU ON THE LIST

For the full list of participants, go to the Landing Page below.
Make sure to enter on each author’s page for more chances to win.

#GIVEAWAY - use the below link to find all 30 authors so you can enter this fabulous giveaway. 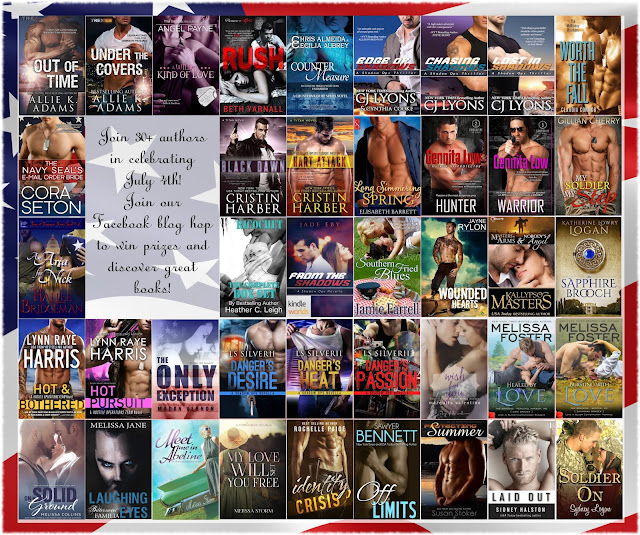 Posted by JBs Book Obsession at 12:51 AM No comments: