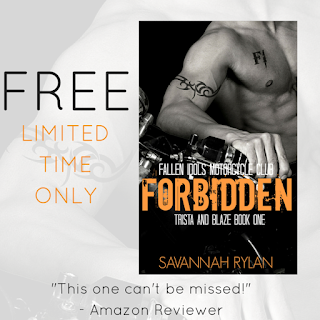 Synopsis
Trista Monroe is . She is the only female member to ever wear the of the Fallen Idols Motorcycle Club. She's nobody's old lady and she likes it that way.
Blaze Taylor hardly remembers the club, but his old man died trying to protect it. He wants to honor his father, but being a prospect isn't easy. Especially when the president's daughter is sexy, feisty and totally off limits.

Forbidden love is the ultimate battle, one that these two Fallen Idols might just die for.

No one in the bar moved; they just kept doing their nightly routine. Drinking, smoking¸ and making fucking plans. I was ready to make mine.

I grabbed my purse. “What’s your name, stranger?”

“Kelly.” That sounded good for tonight. Trista might tip him off to who I really was. A MC member. Blaze, that sounded familiar though. I couldn’t figure out why.

“Well, Kelly, you want a drink? Or should we get out of here?”

I liked how fast he moved.

“Let’s go.” I pulled him by the hand through the front door.

I hadn’t thought that far, usually it was the back of some guy’s car. I was only in it for the sex, but with Blaze, I wanted to know more. “My place?”

He looked surprised. “I’ll follow you? I’d like to see you on the back of that bike.”

Of course he would. “Sounds good,” I a leg over the leather seat. “Try to keep up.”

Trista Monroe is a motorcycle chick, the Fallen Idols MC is her family, and nothing is more important to her than family.  Since she is the only female member and the president’s daughter, it hasn’t always been easy, but she has proven her worth repeatedly. She’s nobody’s old lady and she doesn’t have plans to ever be one. Sex has always been a way to blow off steam, scratch and itch. So why does she find herself wanting more from a one night stand.

Blaze Taylor was born into the Fallen Idol’s MC but he barely remembers the club, the brother’s that his old man died to protect. He wants to honor his father’s memory so against his mother’s wishes, he decides to prospect, but it will be a hard road for Blaze to prove his loyalty. Especially to the feisty MC President’s daughter, he wants her badly and he knows she wants him too but she’s off limits. Is this is love or lust, is either worth dying for only time will tell.

This is the first installment of the Fallen Idol’s MC series and my first read from author Savannah Rylan. I found this book to be a decent start to an MC story. It was short, so not much time given to complete character development, but enough to have me intrigued and wanting more. I thought the female biker chick was a refreshing change from the usual damsels in distress that appear in most MC books. Trista is sexy, feisty and can hold her own against any man I loved her character. Blaze is a bit of a mystery to me and to Trista it seems. They have a very hot and heavy one-night stand; Blaze knows his way around the bedroom. They don’t know each other’s identities so there ends up being lots of sexual tension for these two as the story progresses. The background story consists of trouble for the club someone from within might be a traitor stealing from the club. This made for exciting story that kept my attention and had me wondering where the author will take the story next. Good start to a promising story, looking forward to the next installments.

*RECEIVED AND ARC IN EXCHANGE FOR AN HONEST REVIEW*

Blurb
Value, worth—these are things I don’t have. College degree, great job—none of that matters if you look in the mirror and can’t find anything to love.

Structure, dedication, and determination are the traits that Candace Jones has survived and thrived on. When no one cares at home, it takes her self-drive to push and work her way through college. Life is funny while you’re growing up, and adulthood isn’t any easier than childhood. Little girl dreams are often destroyed before they can even begin.

Lance ‘Rush’ Miller works hard and plays even harder. He lives life from one adrenaline rush to the next, from working as a roughneck to trick riding his street bike. He has it made and knows it.

What happens when crashes into wild abandon? Two complete opposites are thrown together when Candace finds herself in need of a quick escape that Lance is all too willing to give her.

Chelsea Camaron was born and raised in Coastal North Carolina. She currently resides in Southern Louisiana with her husband and two her heart always Carolina day dreaming.

Chelsea always wanted to be a writer, but like most of us, let fear of the unknown grab a hold of her dream. She realized that if she was going to tell her daughter to go for her dreams, that it was time to follow her own advice.

Chelsea grew up turning wrenches alongside her father, and from that grew her love for old muscle cars and Harley Davidson motorcycles, which just so happened to inspire the Love and Repair and Hellions Ride series.

When she is not spending her days writing you can find her playing with her kids, attending car shows, going on motorcycle rides on the back of her husband’s Harley, snuggling down with her new favorite book or watching any movie that Vin Diesel might happen to be in.