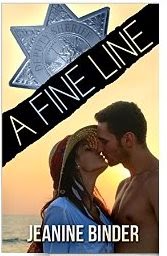 Lori Winslow (real name is Taylor – but everyone calls him Lori) is an undercover narcotics deputy for the San Diego County Sheriff. He is deeply undercover – working to bring down a major drug syndicate, so only his boss and the Sheriff know what he is doing. His father is fairly wealthy, but he shuns most of it and their relationship is almost non-existent. He works undercover with an alias – Adrian Martin – so that there is no blurring of the lines between work and his real life.He meets Dr. Leigh Matthews – who is the Director of Emergency medicine at the local hospital; fairly high ranking job for a blonde female – when he gets his ribs broken in an arrest. She agrees to go out with him after he remains persistent and because of how busy each is, their relationship seems to work. Their relationship comes in comfortable – she is not clingy and is able to accept that Lori disappears from view for weeks at a time.The book goes back and forth between them – things get a little dicey when Lori gets close to taking down the drug cartel – lots of things happen (not all so nice) but love wins out in the end.