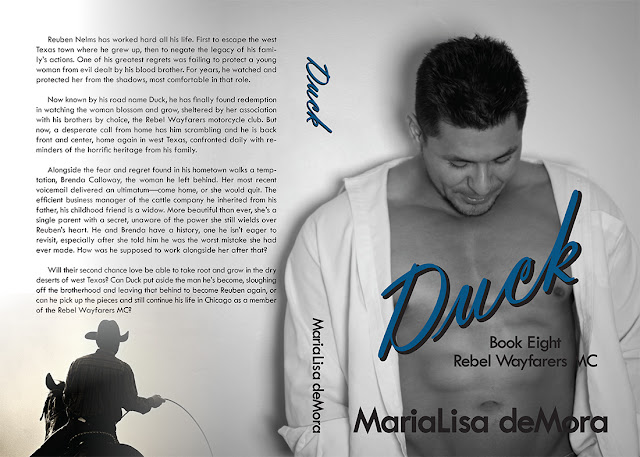 Reuben Nelms has worked hard all his life. First to escape the West Texas town where he grew up, then to negate the legacy of his family. One of his worst regrets was failing to protect a young woman from evil dealt by his blood brother. For years afterwards, he watched and protected her from the shadows, most comfortable in that faceless role.

Now known by his road name, Duck feels he’s finally found redemption in watching that woman blossom and grow, sheltered by her association with his brothers by choice, the Rebel Wayfarers motorcycle club. Things were settled, predictable, until a desperate call from home sets him scrambling and he is back front and center, home again in West Texas, finding himself confronted daily with reminders of his horrific family heritage.

Treading alongside the remembered fear and regret surrounding him walks a temptation, Brenda Calloway, the hometown woman he left behind. The efficient business manager of the cattle company he inherited from his father, his childhood friend is now a widow. More beautiful than ever, she’s a single parent with a secret, unaware of the power she still wields over Reuben’s heart.

Will their second chance love be able to take root and grow in the dry deserts of West Texas? Can Duck put aside the man he’s become, sloughing off the brotherhood and leaving that behind to become Reuben again, or will he be able to pick up the pieces of his teenage love and still continue his life in Chicago as a member of the Rebel Wayfarers MC?

“Everyone has three lives: a public life, a private life, and a secret life.”
– Gabriel Garcia Marquez
Add to Goodreads

Are you ready to see the cover for Duck, Rebel Wayfarers MC, book #8?

The cover photo featuring James Xavier by Michael Meadows Studios is one of my all-time favorites. To me, James makes a perfect Reuben Nelms, and his secret smile in this image holds so much mystery. Makes me want to get in there and see what I can learn about his story. Get in his head, find out about the character…the man. Love the shot, love the man, love the fotog who made it all possible.

Thank you both!
Debera Kuntz, thank you for being willing to tackle this project with me, I adore the cover! You rock, chickie!

Raised in the south, MariaLisa learned about the magic of books at an early age. Every summer, she would spend hours in the local library, devouring books of every genre. Self-described as a book-a-holic, she says “I’ve always loved to read, but then I discovered writing, and found I adored that, too. For reading … if nothing else is available, I’ve been known to read the back of the cereal box.”

A hockey fan, hiker, gamer, and single mom of a special needs son, she embraces her inner geek and has been working in the tech field for a publishing company for a couple decades.

Music is a driving passion, and she says, “I love music of nearly any genre — jazz, country, rock, alt rock, metal, classical, bluegrass, rap, hip hop … you name it, I listen to it. I can often be seen dancing through the house in the early mornings. But I really, REALLY love live music. My favorite thing with music is seeing bands in small, dive bars [read: small, intimate venues]. If said bar [venue] has a good selection of premium tequila, then that’s a plus!”